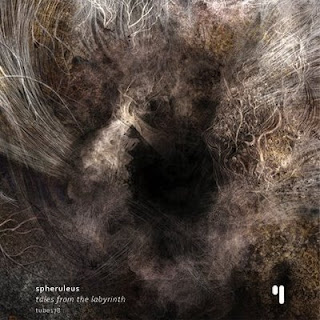 I am very pleased to further establish the name of Spheruleus as a guise for my Ambient/Drone/Soundscape work with this second album, on Portuguese netlabel Test Tube.
Test Tube is a netlabel focussed on releasing obscure experimental albums from talented artists accross the globe and I have been fortunate enough as Spheruleus to be listed amongst these with 'Tales From The Labyrinth'.
I actually had the album finished early this year, but such is the scale of the operation at Test Tube, I've had to wait patiently for a release date as there were many others confirmed to be published first. It turned out to be a blessing in disguise as it was this window of time that gave me chance to arrange the front cover design. Normally, the cover artwork is not something I would enlist as a forte of mine...so it was great to have the time to arrange with Eric Lacombe (Monstror) to put something impressive together for me.
On Eric's blog http://monstror.blogspot.com/ you will find a wealth of highly detailed images that are simply captivating. The idea behind 'Tales From The Labyrinth' was to get a seemingly minimal cover image that with closer inspection, gives way to subtle intricacies and delicate detail. This reflects the music and the album concepts:
"A labyrinth, unlike the maze, has one clear/unambiguous/obvious routeto the centre. Whereas a maze has many complex and difficult tonegotiate pathways."
"The ancient ideas behind the labyrinth was to create a spirallingpathway to the centre where say a holy shrine or statue would be. During the walk through the labyrinth's spiralling pathway, the personon the journey would feel separated from the outside world and itwould give time for reflection and to focus the mind."
"It is this whole idea of reflection whilst in solitary confinement ora quiet space that opens up the theme to the album. Those four trackshave been created as an audio version of the labyrinth and createspace for the listener to confront any thoughts they may have orproblems they may have been posed."
"It is intricate yet minimalist 'music' and adheres to the old visionthat Brian Eno had when he first created Ambient music. It is asignorable as it is listenable, which means the listener willconstantly be fluttering between the conscious and subconscious stateof mind. It is during this state that clearer thinking can beachieved."
LINK:
http://www.monocromatica.com/netlabel/releases/tube178.htm
TRACKLISTING:
A): There Are More Than Four Walls
B): Escape Escapism
C): Where Does The Answer Lie?
D): It Sits On A Shelf Inside My Skull
Posted by Harry Towell at 4:30 PM