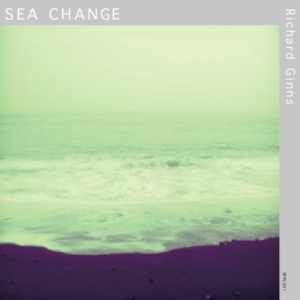 Thanks to an earlier digital version of Sea Change being made available through Richard Ginns' Bandcamp account, I have had the luxury of familiarising myself with this excellent body of work before my CD copy arrived in the post via Slow Flow recordings.
The album itself is presented with a concept that straddles themes of both the resonance of memory and an overall nautical aesthetic, whilst allowing lots of scope for individual listener interpretation. The inspiration for the project was drawn from Ginns' personal memories of childhood visits to the seaside and the sentimental memories that he attaches to these. Other than sound, another key ingredient he uses is polaroid photography which is something often associated with memory. Both the Bandcamp mp3 version and the Slow Flow CD copy sport different but equally effective images, although it has to be said that the effect is much better received in the physical format.

I have to say that Richard Ginns is a new one on me. I was alerted to his work through social networking and a glance at his past discography reveals that he is relatively new to the scene with just one other release on the 12x50 imprint. It's interesting to learn that this artist hasn't even had an early foray into the netlabel scene, which is where lots of artists begin treading their path to sort of test the water. Upon listening to 'Sea Change', you will likely be struck by how beautifully crafted this body of work is for such a new name...this could perhaps be attributed to time spent studying music technology at the universty of Huddersfield in the UK. Regardless, Ginns' work will plant him firmly on my radar; 'Sea Change' is a fine body of work.
Minimalist, yet brimming with detail, this is something that warrants and subtly encourages repeated listens. It is so considered, careful and explorative, conveying a strong but loose collection of half remembered childhood memories at the sea-side...something that is close to the hearts of most individuals. Even if you don't have any early sea-side memories...this album will have you dreaming of them, as if they actually happened.

Timescale and track placement-wise, Sea Change is set out perfectly. The opening piece 'Riverbank' is mid-length and is a subtle lulling piece to initiate the events to follow. From then, a collection of three shorter pieces break things up a little. Second piece 'On Lakes' is outstanding, 'Mossbank' fuses textured drones with jittering glitchy tones before 'Point Dunes' adds a real sense of wonder as you listen. In 'Looking North', we have the longest composition on offer, clocking in at fifteen minutes. The sheer level of detail will hold your interest, as the soothing atmosphere ebbs and flows like the sea. Things draw to a close with the soothing chimes of the title track 'Sea Change', which really eek out those nostalgic moments. The whole album has a wonderful helping of nostalgia-inducing ingredients to it, but never more so than in the closing piece. Maybe this is because as you listen, you know that the experience is drawing to a close and this ties in well with your own realisation that those past memories have gone and are fading with the passing of time.
The album has been released through Slow Flow recordings in Japan and is a wonderful record as part of a solid roster of releases, including work from the likes of Fabio Orsi and Ian Hawgood to name but a few. It'll obviously appeal to fans of the label but for those of you unfamiliar with Slow Flow but like anything by the likes of Marcus Fischer, Taylor Deupree, Offthesky, The Green Kingdom or Asuna and Opitope, you know what to do... Highly recommeded - here's where to get yourself a copy:

FROM THE LABEL (JAPAN):
http://slowflowstore.net/index.php?route=product/product&product_id=80

DIGITAL ONLY FROM THE ARTIST:
http://richardginns.bandcamp.com/
Posted by Harry Towell at 3:45 AM