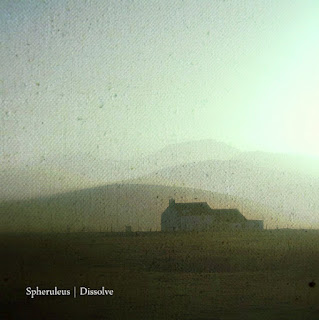 New two piece Spheruleus digital album, out now!
http://music.audiogourmet.co.uk/album/dissolve
In his first solo release since last year's 'Voyage' album on Hibernate, Spheruleus gets the year up and running with this pair of longform pieces called 'Dissolve'.
Dissolve is currently a digital only release, presented as a vinyl or tape set with two 'sides'.
Both pieces are continuous longform tracks, culled from a wide pool of instruments including guitar, violin, cello, harmonica, vibraphone, french horn, piano and voice. The instrument sounds are blurred into a swirling collage, accompanied by light shards of noise, radio static and field recordings.
The cover artwork was provided by photographer Richard Outram, (who also did the artwork for Voyage) and then treated with a canvas effect to make it look like a painting of what would (at first) be the artist's ideal home.

Harry Towell, the man behind the Spheruleus moniker has recently been residing in a living space for a short time, which has for some unknown reason been less than inspiring. He is due to move soon, which got him thinking about the time he has spent living in his current home and how his musical creativity has been hindered by it. He pondered upon what would be the most ideal place to live in terms of inspiring creativity and immediately recalled Richard Outram's beautiful photograph of an isolated house against a backdrop of mountains on the Llyn Peninsula in Wales.
The area is very much untouched and the houses are scattered sparsely.
Soon, thoughts turned to how such a place of isolation may eventually induce a despairing loneliness despite its obvious beauty. In turn, this gave Harry the inspiration to make the most of his current living space and overcome his hindered productivity with one last creative surge before he moves to pastures new.

Aside from this, the rest is left wide open for individual interpretation and it is hoped that the imagery and titles evoke thoughts that each listener can relate to themselves.
Posted by Harry Towell at 2:25 PM