TOP 10 DRONE/MINIMALISM ALBUMS OF THE YEAR
Much of the material in my top albums of the year is highly musical, with the likes of the modern classical and folk scenes forming much of my playlist for 2011.
But, being a huge part of my musical taste, there was a lot of terrific minimal, more abstract or drone based works released throughout the year so I decided to do a second end of year list for albums. I don't like to talk too much about genre as it's not normally relevant to my music taste, but the following list of ten are my favourite minimal records from 2011. As usual, there were many more that are really worth a mention but I've forced myself to whittle it down to just a few that were particularly special to me.
They will often take a little time to have their effect on you, but there is great beauty in their subtlety. You will be rewarded for your patience - it is my guarantee! 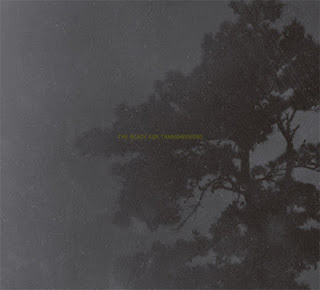 1). JASPER TX - THE BLACK SUN TRANSMISSIONS
[Fang Bomb]
http://www.fangbomb.com/FB016/index.html
Practically the reason that I decided to do a second chart - 'The Black Sun Transmissions' is a real labour of love from talented Dag Rosenqvist, the man behind Jasper TX.
I guess strictly speaking, there is more than enough going on in this marvellous record for it to be classed as minimal, at least in the 'ambient' circles. However, this record took time for me to get to grips with properly. It is something that provides a powerful intrigue that encouraged me to go back to it time and time again, which is a very special ingredient to an album that is not to be underestimated. Yes, its appeal is not necessarily instant - but then, we're not into hooky pop music, are we?

What will strike you on your first listen is just how carefully Rosenqvist builds up the atmosphere over the first piece 'Signals Through Wood and Dust'. Mere rattling creaks of noise give way to tensioned drones that lay down the path that follows. Into 'Weight Of Days' and it seems that we have more of the same; Dag is in no rush to win us over. And why should he be? A great deal of time was invested in The Black Sun Transmissions by the artist, and whilst digitally manipulated modern classical suites are all the rage at the moment, he has draped the full spectrum of his artistic ability into one album and allows it to carefully unfurl.
On the modern classical tip and back to 'Weight Of Days', we have a cello performance from Aaron Martin to expand the pallette a little. It's the obvious choice as favourite track for me but its inclusion as the second piece rather than first is effective in heightening its reception, after the murk of opener.

Continuing with further explorations of melodic drone, noise and static, this record takes its time to play out. The drones are a mixture of relaxed and melancholic, whilst the noise adds an element of tension. Final piece 'White Birds' welcomes back the more acoustic source of melody, in the form of gentle piano. Melancholy is a prominent feature as the album draws to a close.
'The Black Sun Transmissions' is a classic already. Not only this, we've possibly witnessed Jasper TX's finest work to date - and that's really saying something!

2). RICHARD GINNS - SEA CHANGE
[Slow Flow]
http://slowflowstore.limitedpressing.com/products/14242
I don't often make reviews on this blog but earlier in the year, Richard Ginns' Sea Change was one of the hand full or so albums that I put pen to paper about. Released on Ryo Nakata's excellent Slow Flow recordings, its sound is reminiscent of some of the output you might have heard on 12k. It doesn't dip in quality and could easily been snapped up by Taylor Deupree. It reminds me a little of Marcus Fischer's 'Monocoastal' on 12k in 2010...and we all know how terrific that is!
Read my review here, for more of my thoughts:
http://audiogourmet.blogspot.com/2011/08/review-richard-ginns-sea-change-slow.html

3). HERZOG - YOUNG LUNGS AGAINST THE SEA
[Bedside Table]
http://herzog.bandcamp.com/album/young-lungs-against-the-sea
Another album I reviewed this year was Herzog's first self-released album. After several years plying his craft in the netlabel scene, Bill Bawden has made a leap this year to physically released music, using the popular Bandcamp interface. Bill has released some of my favourite netlabel music over the years, for labels like Resting Bell and I was also delighted when he made a fifteen minute EP for my Audio Gourmet netlabel.
So, when I heard he was working on an album, I was extremely excited to say the least. And, it doesn't disappoint. All the tricks of the trade that Herzog has picked up over the years are applied beautifully in this exceptionally strong album. Musically, conceptually and in design, Young Lungs Against The Sea is a masterpiece.
Read my review here, for more of my thoughts:
http://audiogourmet.blogspot.com/2011/04/review-herzog-young-lungs-against-sea.html

4). CINDYTALK - HOLD EVERYTHING DEAR
[Editions Mego]
http://editionsmego.com/release/eMEGO+122
Late on this year, I purchased an album I'd seen rave reviews on and from an artist that I am unfamiliar with. Cindytalk has been in operation for decades now and it shows in 'Hold Everything Dear', a twelve track masterpiece of detailed minimalism. Shards of noise, warm washes of drone and delicate piano are just a few of the ingredients that form this feast for your ears. It is beautifully paced throughout - some pieces are short, some are longer and the sonic pallette is as wide as it comes here. The album is at its strongest when the lighter moments of piano are in focus but the effect of these moments is all the better for the waves of light distortion, feedback and static that envelope them.

5). HAKOBUNE - I DISCOVER I'M MISSING
[Apollolaan]
http://apollolaan.blogspot.com/2011/09/hakobune-i-discover-im-missing.html
In an album that I have often retreated to in times of struggling to sleep, 'I Discover I'm Missing' is possibly Hakobune's best piece of work. Whilst previous excursions have registered strongly, this manages to go a notch or so better in my mind. I'm not sure whether it is because I prefer the tone to the drones or whether it is something else, but it is an incredibly successful piece of work in my mind.
I open by referring to it as a sleep album and although this is an excellent listening scenario for it, it is not where it is limited to. Conceptually, this album gives plenty of food for thought during conscious listening. The stunning artwork portrays gardens and some kind of dwelling - colourful and incredibly beautiful. Yet there is a lack of human presence. This is interesting to focus upon as you listen and soon, you will discover that you are missing from your own environment as you try to fathom this thought provoking subject matter.

6). EZEKIEL HONIG - FOLDING IN ON ITSELF
[Type]
http://typerecords.com/releases/folding-in-on-itself-2-2-2
As always, the forward thinking Type label continued to impress this year with open minded music policy. They refuse to be put in a box in terms of genre and this is to their credit. There were all kinds of fascinating albums out on Type in 2011 but the real stand out for me was in the form of field recordings based minimalism from Anticipate boss Ezekiel Honig. Available on vinyl and CD, Folding In On Itself is centered around field recordings whilst also including quietly fractured minimal kickdrum rhythms, drones and even some acoustic sounds provided by people such as Nicola Ratti, to name but a few.
The field recordings are densely layered, which is perhaps the source of the album's beautiful concept and are a joy to listen to. There is so much to this record, which presents itself in such a subtle way.

7). SIMON WHETHAM - PRAYERS UNHEARD
[Dragon's Eye]
http://www.dragonseyerecordings.com/catalogue/de5032.html
With a set of field recordings taken in Poland, Bristol, UK based sound artist Simon Whetham released some of his finest work on Dragon's Eye, in early 2011.
'Prayers Unheard' gives way to thoughts of how many people were killed in concentration camps during the horrendous Nazi regime.
Dark as the subject matter may be, this album is some of the lightest, more music work I have heard from Whetham. After the carefully constructed minimalism of the opening piece, Part Two delves carefully through beautiful musical passages that sound incredible. It is a longform piece, presented as chamber music and is easily the best of this three-part album. However, the field recordings and minimalism eitherside are crucial in heightening its effect as well as providing more for your ears to explore the more time that you invest in it.

8). UNTITLED - UNTITLED 02
[Unknown]
http://boomkat.com/cds/478164-untitled-untitled-02
You may think here that I have gone either slightly mad or just a bit forgetful. Not in fact the case (well, debateable!). I discovered this year through distributor Boomkat that there is a label out there operating completely covertly, with the artists releasing through it following suit. I was incredibly intrigued by the first release although, I missed out - it sold out in no time. That is unfortunately the case with this, the second release in their mysterious catalog. It does seem that this series is being well received, despite the fact that we have no idea who is behind either the operation nor the sound art that it is its subject.
With the huge level of intrigue aside, the music is terrific too. I seem to remember the first release being more modern classical but the second is in a much more minimalist vein. Perhaps it could be Machinefabriek? Or Jasper TX? Who knows and does it even matter? It is absolutely terrific. I'd best stop there, as they've all sold out and I'd hate to rub it in. Just be sure to keep your eyes peeled for these - they'll be gone in a shot.

9). CHIHEI HATAKEYAMA - MIRROR
[Room40]
http://room40.org/store/HATAKEYAMA_MIRROR
I've long been a fan of Japanese artist Chihei Hatakeyama and his magnificent The River, which kicked off the Hibernate label, is one of my all time favourites. His latest effort 'Mirror' follows up his 2009 release 'Saunter' on the mighty Room40 label and showcases all the reasons why he is one of the best around at what he does. Swarms of light drones will lull the mind into a relaxed state and opener 'Ferrum' is as good an example of this as you will find. Interestingly, Hatakeyama has followed each piece with a short field recording, which serves to clear the mind ready for the next piece of textured droning soundscape. Superb as a sleep album and great in the day time too, preferably when the sun is out.

10). DARREN HARPER - FALLS
[Childrenplay Records]
http://darrenharper.bandcamp.com/album/falls
There were a few new labels in 2011 and one of the smaller operations coming to the fore was Childrenplay Records. With tiny batches of limited edition CDs backed up with a digital download option and a strong line-up of emerging artists, it particularly caught my attention when they announced that Darren Harper was to release with them. I've long been a fan of Darren's work ever since I got into ambient music and 'Falls' is a solid example of his excellent talent.
Read my review here, for more of my thoughts:
http://audiogourmet.blogspot.com/2011/07/review-darren-harper-falls-children.html