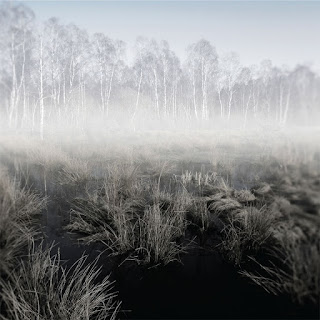 'Clearings' is the latest release on the Rural Colours label and their first outing of 2013. A glance at the three pieces in the tracklist and you'd be forgiven for assuming that this one is another of the label's excellent 3" CDr releases. On closer inspection of the track lengths, you'll notice that it is in fact an album released on CD, in a limited run of just 150 copies.

Like most of the highly collectible Rural Colours releases, this will not hang around for long - especially given the quality of the work. Ben Fleury-Steiner is an artist that I've kept an eye on for years, with his 'As A Means Through Which I Can Speak' album being a fond favourite in my collection. He has also released an album on Low Point called 'The Places That Find You' in 2011. Now for Rural Colours, he returns with a set of three tracks in which he strives to let go of what he calls his 'anal retentiveness' in the studio. One can assume that he was trying to overcome the urge to use his tried and tested production methods in favour of creating something with new techniques. A first listen through and there is still the evident hallmark of power in the bass frequencies, which I associated in previous Fleury-Steiner records. This makes his work ideal for play on good quality sound systems, turned up loud so that the full benefit can be heard.
I tend to listen to music with headphones, a listening setting in which you can uncover the other key trait to Ben's work - his meticulous attention to detail. Despite any difference in approach and tone through the three tracks, there are carefully woven layers of detail in each.

The album's opening track is the imaginatively titled 'Wind Up Bird's Lament', in which you can make out traces of acoustic instrument sources flowing on a bed of droning mulch. This piece reminded me a little of the work of Christopher McFall or Philip Sulidae in the way that it was quite sinister with an underlying element of power to it, without ever boiling over.

Second track 'Parallax' explores what you might call purer drone territory, although again, the great attention to detail and texture help it stretch beyond that. Like the term or not, I think this is evidence as to why some 'ambient' music is often called sound design, as opposed to drone - with the dense layers of detail setting it apart from being a mere chord drenched in delay. The beauty in Parallax is how it twists and turns in many directions; never staying static; holding your interest. At one point, it builds to reflect the breathlessness you might feel when confronted with a dramatic landscape and then a few moments later, this transforms effortlessly into feelings of doom and horror.

Closing piece 'Glade' initially feels like a second movement to Parallax, deploying a similar technique - which after being so immersed in the previous track is no bad thing. If you listen carefully however, Glade is a more linear piece, with the drone sounding suspended - looping and twisting only slightly but just enough to appear different. It hangs in the balance for a few minutes, with Fleury-Steiner dropping detail in and out to accent it.  The piece is highly meditative and of epic beauty. Towards the final third however, Glade adopts a new tone for just a moment only to sweep delicately back to the original, to reassert itself. It is surprising just how refreshing it feels when it returns, as if the main drone to Glade had become a part of you somehow.

All in all, this is solid work from Ben Fleury-Steiner and highly recommended. The packaging features art direction from Ian Hazeldine and stunning photography from the talented Jürgen Heckel. {LISTEN / BUY}
Posted by Harry Towell at 2:44 AM