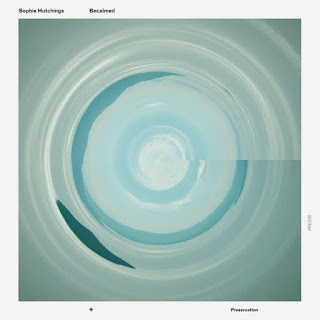 For anyone that has seen my end of year list for 2012, you may have noticed that I included 'Night Sky' by Australian pianist/composer Sophie Hutchings. It was the follow up to her debut in 2010 - 'Becalmed', which is an album that I named as my number one that year.

This link will take you directly to the release page on the Preservation website, where you can read the press release, stream samples and find out where to buy: {BUY / LISTEN}

I listened to this record again and again throughout 2010 and I still return to it regularly. I think solely because I have listened to it so many times, I even prefer it to the richer Night Sky album. 'Becalmed' has a coldness to it that is difficult to put into words. Opening track Seventeen sets the scene and takes its time, as a mid-length piano only composition. It gives a magical feel to it that reminds me a little of John Cage's In A Landscape although, I told myself I wouldn't name drop comparisons here - as Sophie has a sound all of her own.
Shorter pieces follow, where Sophie is joined by friends and family, adding strings and percussion. A couple of real highlights on this wholly complete album include 'Portrait Of Haller', which is incredibly beautiful with the way the melody picks up speed towards the end along with percussion. Another is the imposing 'Toby Lee', which has a dark touch to it. It is easily my favourite track on 'Becalmed' although every track is a masterpiece in its own right.

The official video to 'Sunlight Zone' follows as well as a live performance of both Sunlight Zone and Toby Lee...