Day #0004: Caught In The Wake Forever - Against A Simple Wooden Cross [Hibernate] 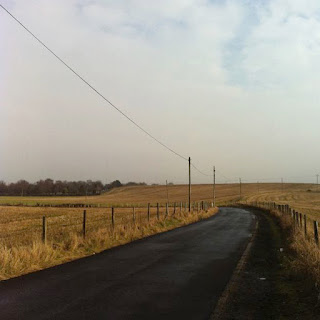 I've not long put down my 2012 end of year list to rest and a glaring omission that I really wrestled with was Caught In The Wake Forever's 'Against A Simple Wooden Cross', out on Hibernate. I have already noticed that it has ranked highly with various bloggers and sites across the net and whether I included it or not, it really is a year end highlight from 2012.

Opening with beautiful field recordings and gentle guitar notes before warm drones unfold over it, 'Scottish Grief' gets this emotional roller-coaster of an album off the mark. This is what really makes this record - Fraser McGowan who is behind the project really lays out all of his struggles for us to hear for ourselves, in one of the most open and honest records I've ever heard. I won't go into great detail but it documents his fight back to recovery after suffering a complete mental breakdown which resulted in him facing his struggles alone. For these six months, Fraser threw everything he had left into the production of Against A Simple Wooden Cross and although there is a sense of loneliness and despair throughout, there are also parts that tread a positive path as he finds his road to recovery.


At the above link, you can hit play and listen to the album and grab a copy for yourself. Also, at the time of posting, there are still some copies left in the Hibernate store, so here is the link:
{LISTEN / BUY}

Jonathan Lees, the man who runs Hibernate has put together a video to closing track 'Point Sands'. Click play to check it out: