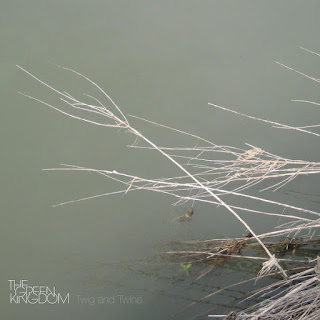 I've been following The Green Kingdom since I first started getting into the modern 'ambient music' scene in the mid 2000s. It was in the 'netlabel days' of my music taste, when I first discovered internet based labels giving away free music. At around that time, impulse consumption of music for me was done in the form of vinyl orders as I was still DJing and always needed new and fresh records but discovering netlabels like EKO, Resting Bell and SEM meant that I could nurture my developing taste in ambient music for free.
I have a lot to thank the netlabel scene for as it really helped form the backbone of my thirst for ambient, experimental and electro acoustic music. I don't listen to very much netlabel music these days as my DJing days are since gone and I don't put in £100 vinyl orders. Instead, I tend to buy commissioned releases in the experimental music scene, whether digital, CD or vinyl. So I still have that same thirst for music that was developed through trawling netlabels, just I don't spend as much time keeping up to date with them.

Twig and Twine has sold out at Own Records. This link will take you directly to the digital album on Boomkat, where you can read the press release stream samples and buy: {BUY / LISTEN}

I have noticed that many of the artists from the netlabels I followed have gone on to release CD releases on bigger labels and one such is Michael Cottone who is behind The Green Kingdom. I have bought nearly all of his releases since 2008's Laminae and looking back, one of my favourites will always be Twig and Twine.
I guess downloading his work on the likes of EKO and SEM in the years prior had given me a strong background into his sound and by the time Twig and Twine was out on the fabulous Own Records label, there was no way I could miss out. Although I'd always enjoyed his music, I never forget when I first heard Twig and Twine - it felt like Michael had really developed his sound since those early netlabel releases.
In the early days of my taste for Ambient music, I looked to the likes of Brian Eno, Steve Roach and Robert Rich as my favourite artists and listening to Twig and Twine, I instantly started to prefer the more textured approach, using hiss, crackle, glitches and acoustic instruments.