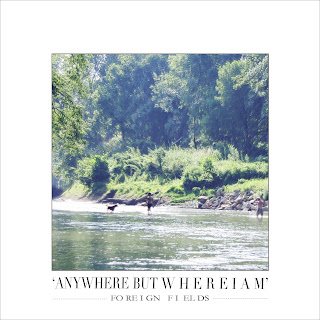 I'm afraid I'm about to harp on some more about year end lists from 2012 but this time, not mine. End of year lists are a great way of discovering music you missed and by far the best thing I've come across so far is an album that would have done well in my list for last year, had I found it. 'Anywhere But Where I Am' is an album by the band Foreign Fields and it was featured by Helio Camacho's (Own Records) top 5 records of the year. I had already come across most but this one was completely new to me and it was love at first click.

I was looking for something new to listen to as I enjoyed some time off by myself just after Christmas whilst my family had all returned to work. I literally had it on repeat, every day and even now that I have returned to work, I am still listening - in the car there and back. What's so good about it? Well firstly, there are plenty of tracks and then secondly, there is great variety to them. Most moments are beautiful, rich and deep but the way in which each is executed varies from track to track. It has a folk feel to it one minute, a post rock feel the next and at times, the lush droning guitar textures point to ambient; some parts are even slightly poppy or electronic. As a whole, it is a very playable, pleasant listen from start to finish. Even the tracks that don't grab you the first time will win you round after a few listens. This is set to become one of my favourite records of all time... thank you Helio!

Hit play below and hear for yourself...

Here's a live video of the track 'Taller' that I found after a quick Youtube search:

Also, don't forget to check out the official video to 'The River Kings' here: