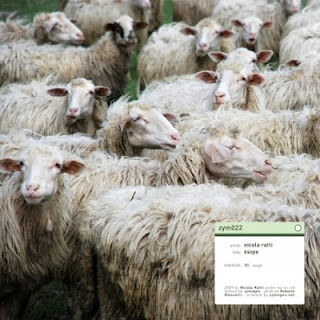 NICOLA RATTI - "ESOPE"
[Zymogen] 2009
As mentioned in a previous post, I began to develop my taste in ambient, electro-acoustic, drone etc through downloading free music from netlabels. There were several labels that I'd visit regularly and there's some great free material up for grabs out there but there are some albums that I listen to regularly even now, a few years later.
èsope is quite possibly my favourite netlabel release of all-time, by Italian artist Nicola Ratti. It was released back in 2009 on Zymogen and followed his collaboration with Giuseppe Ielasi and his marvellous 'From The Desert Came Saltwater' album on Anticipate. At that time, for me this was the first I'd heard of his work and I've been a fan ever since.
èsope is a single mid to long-form piece that includes the environmental sounds of field recordings with chimes, drones, voice and Ratti's signature use of guitar. Rather than his more instant work, this piece takes time to develop from almost nothing and it becomes a real joy to listen to in a most gradual way. When the guitar comes in, you will hope that it never ends. Obviously it does, but it is this tranquil state and yearning for more that will keep you listening until the very end. Although the guitar is the main focus of the track and of course, the sounds of sheep that have influenced the cover art - there is a brassy sound that closes èsope that completely contrasts everything, that will soon be as enjoyable to your ears as the rest of this magnificent piece.
Zymogen as a label has married consistent high-quality curation with a slow release rate, which really builds your anticipation for their next release.