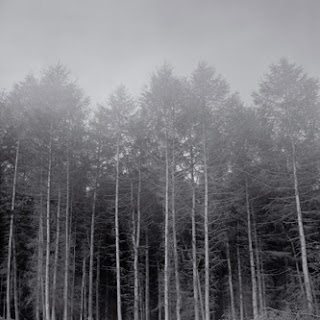 I've made no secret of my fondness for Richard Skelton's work and I dare say that most readers of this post will already be very familiar with his excellent music. For you people, give your eyes a rest and dig out your copy of Marking Time, Verse Of Birds or Landings - sit back and enjoy the show.

For those unfamiliar to the work of Richard Skelton, I will attempt to write a few words but really, just hit play below and you'll quickly arrive at your own decision.

Despite having been a long standing fan of his work, I often find it quite difficult to describe it. I have even got the accompanying book to Landings and have read it many times whilst listening and without just copying the book, it is difficult to try and write a quick snapshot of it. Landings is an album and subject of depth, whilst being simple at the same time.

Richard Skelton produces raw, rustic and emotional music, usually inspired by the landscape around him. When he produced 'Landings', he was living near to Anglezarke in the Lancashire moors, UK. The album is a result of four years spent recording during which, Richard immersed himself in the area. He and his music almost became one with the landscape and the more you listen, you will too. This may sound a little corny but genuinely, if you listen to Landings, it is literally tied to the landscape from which it was inspired.

There are a few versions out there - with a little digging around, you should be able to get the edition on Type, in either vinyl or CD. The vinyl is absolutely wonderful, somehow adding yet more depth to this body of work. If you can get hold of a copy, it will be well worth what ever you pay.
Then of course, there is Richard's Sustain-Release platform, in which he makes special limited runs of his work, with a personal touch.
I have run a quick check and he has some copies of Landings available: {BUY}

Finally, you'll definitely be able to buy the album in mp3 format. You can go for the Type release on the likes of Boomkat and iTunes, I'm sure but the best experience would be direct from Richard Skelton's Bandcamp page. In this special edition entitled 'The Complete Landings', he includes a wealth of bonus material:
{LISTEN / BUY}
Posted by Harry Towell at 2:54 AM